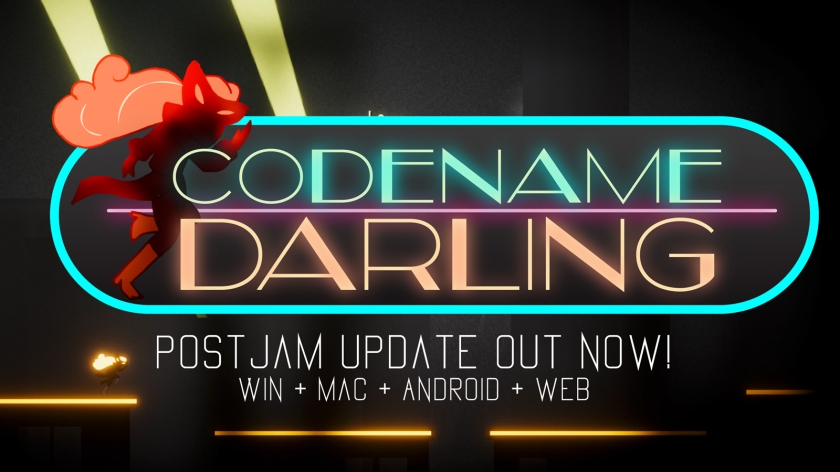 In this infinite, atmospheric platformer set in an alien jellyfish invasion, the player takes on the role of Codename Darling, navigating the perilous rooftops of Neon City. How far can you run?

To stay alive in this endless game, the player needs to time their jumps and double-jumps with increasing precision. A single lapse in judgment can send Codename Darling plummeting to their death, resetting the score.

The first version of the game was made overnight during Pocket Jam #5, September 14th – 15th 2020, in just under thirty hours. Pocket Jam #5 ran in conjunction with the Pocket Gamer Connects Helsinki conference 2020, and the game was awarded joint second place in the jam’s competition by the PGConnects judges.

The game’s aesthetic is inspired by film noir, as well as superhero cartoons and comics. The character animations were hand-drawn frame-by-frame by Lassheikki, and part of Neon city’s soundscape are field recordings by sound designer Rintanen. Krechmer’s layered and driving music pairs with the monochrome environment to set the scene for the moody, 80’s inspired dystopian megacity.

The new post-jam update adds major quality of life improvements such as level selection, sound settings and a high score, as well as updates to sound, graphics and music. Some changes have also been made to the game’s design, adding a double jump mechanic for gameplay variety and softening the learning curve. For fans of the original version (which features an unforgiving difficulty curve) the jam version is still available as a download on itch.io.

Pocket Jam #5 was arranged from September 14th to September 15th, 2020 as part of Pocket Gamer Connects (PGConnects) Helsinki 2020 by the Finnish Game Jam association. The jam’s submissions can be found at: https://itch.io/jam/pocket-jam-5/entries

Christina Lassheikki 2020
Get in touch!